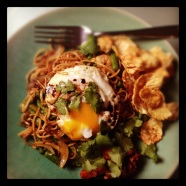 Making the most of the meal-deal – part 3…

Posted by The Singular Gourmet on February 26, 2013 in Meat, Recipes | 1 Comment

Like all good plays and movies, the story of this meal deal is in 3 acts. This is the final one; The resolution where all the answers are contained, and we leave feeling inspired and secure that all is right with the world.

OK, so I know I’m somewhat aggrandising my achievement but I have to confess that I am quietly pleases that a £20 Waitrose meal deal can, with a modicum of a store cupboard, turn into 10 quite satisfactory suppers. And that doesn’t pay heed to the box of chocolates and a bottle of Prosecco that have respectively been inhaled and kept in the fridge.

I also had the 2 Gu puds which I did consider morphing into hot banana trifles but to be honest, I rather like them as they are, so didn’t bother.

The last two recipes use the remaining duck joint and its stuffing, and the small portion of out of season broccoli. (I’d have preferred sprouting broccoli but the good buyers of Waitrose I assume felt there was more romance in asparagus than a brassica). I’ve supplemented the asparagus dish with 6 frozen King Prawns which I had in my freezer. Totally optional and I estimate they added about 30p to the cost. In total I think my additional spend to make these 10 suppers has been about £4.70. Not bad I think…but I lay down the gauntlet. Love to know if anyone is up for another meal deal challenge. Might need to come up with some rules…!

For this final recipe, I used my pressure cooker and cooked everything in the one pan, but I’ve included timings for using conventional pans. That said, if you’re a solo eater, I can’t recommend a pressure cooker enough. And if you get one, you must invest in Catherine Phipps superb book to accompany it. Your pressure cooker will never go back in the cupboard. I promise.

(For conventional pan cooking, make the stew the same way and simmer for 20-25 minutes before thickening with the cornflour. Cut the potatoes into chunks and boil as you would normally. Cool and slice.)

← MAKING THE MOST OF THE MEAL DEAL: PART TWO…THE DUCK The Arrival of Spring: Broad bean ‘Panzanella’ →