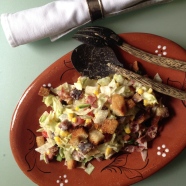 CAN SALAD BE COMFORTING?

Posted by The Singular Gourmet on May 5, 2013 in Quick & Easy, Recipes, Restaurants | Leave a comment

Two posts in one day!? I’m spoiling you, I know. But the one from earlier this morning, had languished in drafts for a week as I pondered the pros and cons of posting. It was a difficult decision but I’m glad I did…so far anyway.

It left me feeling quite vulnerable and having spent the morning polishing  my prose, I have missed breakfast and am also ravenous. But it’s a bright sunny day. Not conducive to those more traditionally comforting go-to foods which are heavy on the carbs and creamy loveliness…sadly.

Then I remembered something my dear friend Natalia (@nataliatraxel) said the other night at The Wolseley. “Chopped salad. It’s so comforting…” In my head I was saying, bahahahaha, as I ploughed my way through a Souffle Suisse that was as reassuring as a 16-tog duvet. But I had a mouthful and almost understood what the size 8 moron of a woman meant. It was a clever amalgam of flavours that didn’t require too much work, but did deliver on flavour and texture.

So today I thought I’d try my hand. This is a bit of a bastardisation of a cobb salad and a bacon avocado. And I’ve just eaten too many of the croutons, all the bacon and picked through it for the avocado so not sure if I can really kid myself away from the thought that actually I’ve just had a toasted bacon sandwich. But here you go…

Oh by the way, I am unreasonably pleased at the availability of small Persian cucumbers on the market at the moment. Perfect of the lone diner. Nothing worse than a soggy ended cucumber losing it’s turgidity in the bottom of the fridge. And I bought an iceberg yesterday as there were no gem lettuces. This would be MUCH nicer with a baby gem…also a nice singular size.

PS. Natalia is not a moron. I love her to bits and she’s VERY clever. And slim.