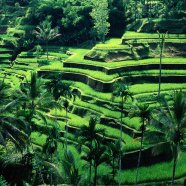 My love affair with Indonesia began the moment I stepped out of a car and into the calm and almost spiritual beauty of The Serai, now known as the Alila Manggis, on the east coast of Bali. The Island of the gods is a unique part of Indonesia,  made up of a speckling of islands covering a 3,200 mile ribbon along the equator,  all of which create this remarkable polyglot archipelago. At its heart  sits Bali, this relatively tiny Hindu island famously called ‘Disneyland for Anthropologists’ so rich are its unique culture and animistic traditions.

Unsurprisingly I went for the food initially. A press trip organised by the hotel group wherein I would learn Indonesian cooking under the tutelage of Jonathan Heath. This talented Australian chef  had spent much of his childhood in Indonesia and had a  deep connection to the food as well as fluency in the language. I had arrived on the day the military dictatorship of 30 years was being overthrown  with a moderate amount of violence more than a thousand miles to the west in the capital Jakarta. Not that you’d know it from the relaxed demeanour of everyone I met in Bali…but in truth a collapsing currency and fear of the future was the under-current. But those stories are for another time. I fell in love with Bali like a teenager on heat. I ended up returning for a 6 month visit, eventually bought land, built a house and now, part of my heart will always and forever reside in the rice terraces of this most bewitching place.

Last night I entertained two friends to supper featuring some of the dishes I have enjoyed over the many years I have been visiting. I’ve been fortunate to become friends with two people who have more than most influenced my knowledge and love for the cuisine. First Chris Miller, the executive chef at the Uma Ubud  and Como Shambhala for many of the years I was visiting regularly. He’s now heading up the kitchens at the Metropolitan Bangkok under David Thompson. He is truly one of the most gifted chefs I have ever known…as well as being a dear, dear friend. Many lazy Sunday mornings were spent enjoying his wonderful breakfast laksa poolside as well as lunches and dinners in the beautiful dining pavilion at Uma. If I had to choose a last meal, I’d hope he’d be available to cook it.

Secondly Sri Owen, a London-based Sumatran whose books on Indonesian cooking are seminal and has a generosity of spirit that speaks of her homeland. If you are even remotely interested in the food of this region, do look out for her Rice Book (winner of the Andre Simon Award) and Indonesian Cooking, in which she shares her remarkable life story beginning in the Jakarta of 1930’s. 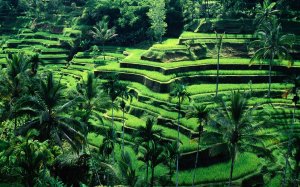 I’ll blog a few recipes but I’ll start with this one. It’s one of Chris Miller’s recipes and one that I would dream about ordering as soon as I arrived. It requires a bit of preparation but 90% of it can be done in advance ready for a final cooking at the last minute before serving. Strictly speaking this isn’t Indonesian although there is a nod to the classic Babi Guling and the Indonesian love of hot and sweet. So I’m happy to give it to the Island as their own.

NB – Do not throw away the stock. Strain and keep in the fridge for a week or the freezer for 3-6 months. Dilute with chicken stock to make a lovely base for an oriental soup.