Posted by The Singular Gourmet on June 11, 2013 in Recipes, SE Asian | Leave a comment

Bali is a Hindu island, and while they don’t hold the cow in quite such high esteem as their Indian cousins, you won’t find many Balinese eating it regularly. The Sumatrans and Javanese however, love a bit of buffalo, which is the meat you should use to make this dish if

you can get a hold of it. I have made it using buffalo meat in the past with Laverstoke Park’s excellent product. It’s sold ready cut in Waitrose, but is cubed a little too small for such a long cooking dish and tends to fall apart. So if you can’t get a bigger piece of buffalo, go for a good piece of well-flavoured stewing beef. I bought mine from the same place I bought the delectably melty pork belly from the earlier recipe – The Ginger Pig on Askew Road. An incredibly impressive butchery I must say.

So what is rendang? It’s eaten all over Indonesia, Singapore and Malaysia. And like any ubiquitous dish, it has as many versions as people who cook it. And ALL of them will tell you that theirs is the true recipe passed down to them from generation to generation usually from the person that actually invented it. But like a pot of ‘Scouse’ or ‘Irish Stew’ it’s something you really should work on making your own.

I use a bits from various recipes and although I do think it benefits from a day or two in the fridge once I’ve made it, I don’t think I’ve ever made it the same way twice; Different brands of coconut milk reduce in odd ways, chilis vary in heat from month to month and sometimes I use all ginger if I don’t have any galangal. I don’t think it really matters except that you give it time, attention and a whole lot of love.

It’s the 6th taste you know… 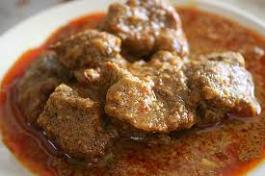 And that’s it for Indonesia…for the moment anyway.