Home » Posts by The Singular Gourmet 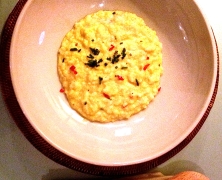 This is one of those recipes I almost didn’t blog. Why? Well, it includes an ingredient that for some reason seems a little embarrassing. A bit like scrolling through my albums in front of Ed the sound recordist the other day to find ‘Ethiopique – music of the 60’s and 70’s recorded on 2 tracks in […]

Recipes are a bit like friendships. There are those with whom we spend a lot of time and the oft resulting familiarity can occasionally breed contempt. When I was a child, mince was the dull old standby I longed to throw over for something more fashionable. My mum, ever on-trend, made Bolognaise a family favourite […]

Blogging or Blagging. Who gives a f*ck?

In the office of a very famous chef there is a framed cover of a Radio Times. It features a long dining table around which 13 chefs sit, all laughing and joking in their pristine whites. They sparkle as if they can’t quite believe that they, mere passionate craftsmen and dedicated cooks, have found themselves […] 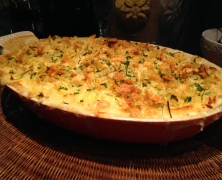 I can’t abide leftovers. By that I mean, I do hate things sitting in the fridge and not being used only to be chucked away when they turn into ‘whew…what’s that smell’ when you open the door. So the dozen or so cooked prawns still sitting in the jellied stock from my ‘Shrimp ‘n’ Grits’ […]

My lunch date was enviably pretty – and slim despite her successful career as a food writer and cook, so you may think I wouldn’t be predisposed to affection. However, on looking at the concise menu at The Lockhart – London’s latest paean to Southern cuisine – she posed a question that utterly bewitched me. […]

I’m in a new relationship. We’re still in the getting-to-know-you phase…finding out what each other likes, being very careful to make sure each other is happy, wondering where it’s all going… I’m feeling really positive about it. It’s quite exciting really. I can’t wait to get home in the evenings, just so we can spend […]

So, I’ve been away for an age. I found myself in the UAE, shuttling between Dubai and Abu Dhabi, serving up what skills I have as TV producer to the good people of the GCC. Cooking was involved of course and in what little spare time I had, a modest amount of eating. I was […]

I live in that solitude which is painful in youth, but delicious in the years of maturity.

My archive of Reviews & Recipes

The Art of Eating Alone
Blog at WordPress.com.