Posted by The Singular Gourmet on July 29, 2012 in Meat, Recipes, Restaurants | 1 Comment

If you happened to be in Mayfair on Friday I wonder if you saw a commis chef clutching his CV and nursing a black eye amidst the jolly swarms of Olympians. If you did, it may well have been my fault. In my never ending search for the perfect working environment, I went to Little House on Queen Elizabeth Street. It’s the latest outpost of Soho House. Decorated in ‘modern-club’, a style mastered by Nick Jones across the globe it’s comfy and modern with a sense of Mayfair in the panelling and furniture. Huge windows opening onto the street on which high backed Windsor chairs are home to smokers but wouldn’t look out of place on the terrace of George Washington’s Mount Vernon in Virginia.

Being a club, my solo status isn’t an issue at all. The menu is a bit short but it’s a small place so it’s sensible. But it was all quite meaty or pricey. I tried to see what Lulu (yes that Lulu) was having but she seemed to just be drinking so settled on the spinach ravioli with gorgonzola and pine nuts. When it arrived it looked even better than I expected: Two pasta envelopes so thin I could see the veins on the spinach. A few golden pine-nuts, a drizzle of oil and some gratings of parmesan. Not those big peelings that I hate, and not sprinkles of dust – an excellent grating gauge had been employed. It was really appetising.

Then it wall went wrong. The first fork resulted in a mouthful of grit. Ok…maybe it’s just a rogue leaf. I take another bite. I could feel the enamel on my teeth being scratched. This was not good. I called over the manager. “Are you sure it’s not just the sage?” I really wasn’t sure what that meant but demurred. He took the plate away with good grace but it is at these moments that I am quite sure I have special mind reading powers. As he walked to the kitchen I could hear his inner dialogue quite clearly: “Silly woman…so picky…harumph”. I know I was right but somehow can’t help feeling wrong in these situations.

I remember the same thing happening not 50 yards from where I was sitting at Mirabelle. It was Christmas eve in 2001 or thereabouts. I was with my mother. John Thaw and Shiela Hancock were at the next table and Marco Pierre White was surveying the room from a table in the rear. I’d ordered squid ink risotto. It arrived all glossy and jet. The first mouthful was crunchy and chalky and horrible. I took another and no, it wasn’t me. It wasn’t cooked. I knew enough to know that in restaurants, risotto was always taken to a holding point and individual portions were then cooked to order in about 10 minutes as opposed to the 30 it would take from scratch. Presumably the chef in charge had 4 or 5 sauciers on the go at once and just plated up the wrong one. Not a crime but boy, was I made to feel like an idiot. The waiter pompously told me that they served the rice al dente. I imperiously responded that I knew the difference between al dente and uncooked and if he would just take it back to the kitchen and ask the chef to taste it, I was sure he would agree.

Across the restaurant I saw Marco uncurl and lope towards the kitchen. It was around the time he was famous for throwing people out of restaurants. I began to wonder what I had in the fridge…what would I be able the throw together for our Christmas eve? But no, a very shamefaced waiter returned and confirmed that it was indeed uncooked. Apologies were proferred with something off the bill. All happy in the end and my culinary confidence boosted a bit.

And so, back in Little House, the same slightly cowed face that returned from the kitchen. My lunch would be on the house. What else would I like from the menu? Sadly the ravioli wouldn’t be an option. The chef had tasted it and the whole lot had to be binned. It was then that I imagined a poor commis chef getting screamed at for not washing the spinach. If anything I was reassured that they were using fresh spinach and not the stuff that come pre-washed in ammonia and bleach. I opted for the burrata and heritage tomatoes. The cheese was glorious but what is it with heritage tomatoes? They used to be great, then they were hi-jacked and now they’re just an expensive way of getting us to eat bad fruit. There were all tasteless and pappy…a total waste of time. Looked gorgeous, tasted of nothing. Not the most successful lunch but there you go…

I have no idea how I’m going to segue into this recipe so I won’t try except to say I have been on an economy drive to the shop last week featured mince and chicken livers. I was going to make a chicken liver salad. Then I changed my mind and thought I’d add them to a Bolognaise ragu but I forgot, so last night with them needing to be eaten I thought I’d make a parfait – posh pate really.

I checked out Raymond Blanc’s recipe from his book Kitchen Secrets. Seemed simple enough but used 400g of butter for 400g of chicken liver. I’m sure that would be lush, but I wanted something lighter. So here’s my recipe. It gives a lovely silky mousse like finish to the parfait : 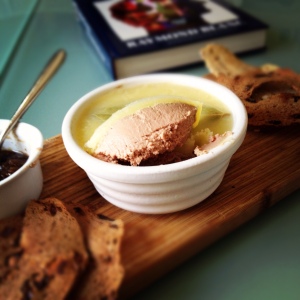 Place the mixture into a selection of ramekins or dishes for one.

I used my sous vide to cook them and have to say it gave them an incredible finish. But at this point you could cook them in a bain marie for about 30 minutes in the oven. You’re looking for an internal temperature of 67-70 degrees.

If using a sous vide, place the ramekins in the freezer for an hour to firm up. Makes vacuuming less problematic. Leave in the sous vide for 4-6 hours. Depending on the size of your ramekins. Chill and cover with spice infused melted butter.